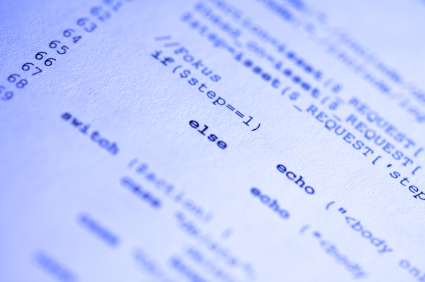 Anyone who's ever worked on an ad-hoc development team will tell you how frustrating it can be to have to deal with team members who write messy code. Even if you're working alone, there are huge advantages to taking just a little bit of extra time to keep your code clean and easily readable. You may be thinking to yourself, 'Sure, but I know my own code, what's the point?' The point is that while you're going to be able to revisit the code you wrote yesterday and understand it perfectly even if it's gibberish, how about code you wrote last year? Last month? After a marathon coding session, code you wrote last week might even have slipped your mind. If you ever plan on reusing anything you write, which is an excellent idea, taking the time to follow these tips will make it infinitely easier to do so.
The most important thing to do to help your future-self understand your code is to include quick comments at the beginning of each section. For more involved projects, take the time to make some notes about functions and classes - especially useful for later reuse.
Following the same principle of documentation, when you're debugging your code, don't delete sections of it that have problems, simply comment them out completely. This allows you to quickly test various iterations of your code snippets without having to re-do the same work over and over again, and lets you quickly revert to a previous version. Once you move into production, you can obviously remove the sections that have been commented out, but make sure you keep them around in your latest pre-build version.
Clean is simple and informative. To stay informative, don't give your variables and functions bizarrely esoteric names. Even you will have a hard time keeping track of variables with ridiculous names - now was that variable you wanted to pass GERSFD, GARFVD or ARGFD? Use logical, descriptive names to keep things simple and easily understood for later.
Whitespace, whitespace, whitespace. Sorting through tens of thousands of lines of code is difficult enough without having to take the time to figure out where functions start and end. Your compiler will strip the whitespace during build anyways, so use it as a visual tool and make your own life easier. If you find yourself looking back over your own code or someone elses and getting frustrated trying to make heads or tails of it, you might want to consider using a PHP formatting tool just as PHP Formatter (http://beta.phpformatter.com/) or something similar.
SHARE: