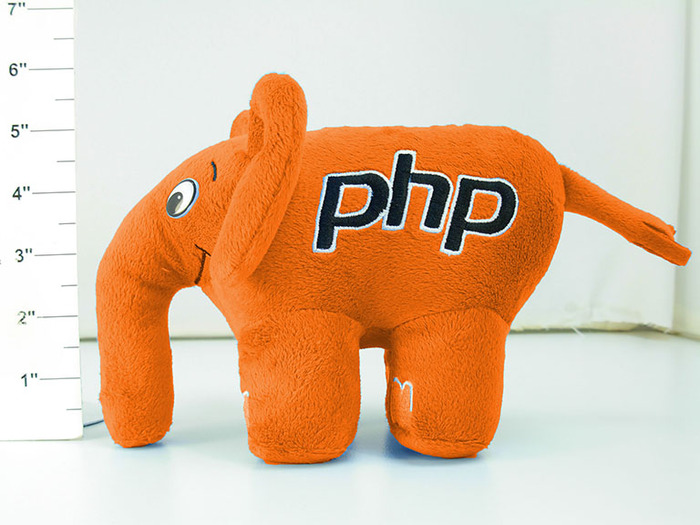 If the title of this post made you do a double take, we don't blame you - PHP never struck us as particularly cuddly either. Sure, it's great and all, but cuddly just doesn't fit into the list of things you think about when you hear the word PHP. In order to combat this image problem, a number of PHP developers have banded together with an - to some at least - unexpected project. After all, other geek projects have mascots that work to reach out to emotional appeal - most famous, of course, is Tux, the loveable penguin who adorns the Linux masthead. Even Android has its adorable little robot, inexplicably known as 'BugDroid'. But some people may not be aware that PHP has its own little mascot, the ElePHPant!
The original mascot design was invented in the late 90s by French PHP developer Vincent Pontier (known in less formal settings as Elroubio), almost by accident, as he was doodling with the letters PHP to create a logo for a friend's website. Eventually, the idea took off around the net, and ten years after the initial design was completed and uploaded, Pontier took it upon himself to follow in the footsteps of Tux and the Linux community and create a plush version of the ElePHPant. Currently available in blue, pink and green, the folks over at php[architect], one of the oldest PHP development magazines (old enough to have started in print!), is hoping to celebrate its 11th year helping the PHP development community with a special orange edition of the ElePHPant, as orange is the predominant colour of the magazine itself. If you're looking for a cuddly coding companion, or just something to brighten up the office during your marathon coding sessions, be sure to swing over to the Kickstarter page and get in on the ground floor.

However, it's not all fun and games - as Pontier himself said of the original plush ElePHPants, "Don't kid yourself, this is not a toy! This is first and foremost a special partner for every PHP coder. Trouble with sessions? A bug in a class? A crashed method? Don't worry! Just tell your ElePHPant the problem, and he will give you the solution (and if the solution is not worth it, you may also throw him on the walls)." We've all been there!
SHARE: